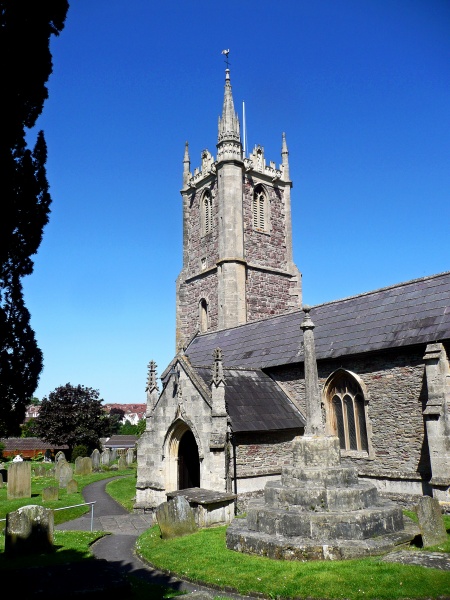 There’s been a place of worship on the spot for many hundreds of years, and the Preaching Cross outside the church is very old indeed. It is thought to pre-date the church, and it is from this that the Augustinian Canons from Keynsham Abbey would have preached.

The present church is believed to have been founded by the 5th Baron Thomas La Warr about 1420.

The church was a simple stone structure consisting of a nave, a chancel, a south aisle with a porch, and a handsome tower that is still a striking part of Brislington’s landscape (one of a small group of Somerset towers known as the “Brislington Group” being small in size but second to none in the county for beauty and detail).

The North Aisle was added to the church in 1819, and in 1874 the church was extensively altered internally. The 18th century gallery was demolished, the chancel was extended and the floor tiled. Old “horse box” pews were removed and replaced by new seating, and the original Jacobean pulpit lost its upper deck and was given a new stone base.
The first of the six bells is dated 1669 and the sixth, treble, bell was added in 1874 “to make the peal complete”.

The first reference to a church clock was in 1714. The present clock was given by Dr C H Fox in 1883 in memory of his father Francis Ker Fox of Brislington House.

However, we are not simply a historical building. St Luke’s is a living, breathing presence in the neighbourhood and we are excited to be able to be here, right now, in this place, worshipping God and finding ways to build the Kingdom today.

Our building is certainly beautiful, and the history matters, but only if we continue to make St Luke’s an active and relevant church today.

St Luke’s is the old village church of Brislington. Until the early 1930s Brislington was still a village outside of the city of Bristol, and part of Somerset. The area around the church is still referred to by many as ‘The Village’, although it is extremely difficult to recognise any vestiges of village life now, with the A4 Bath Road flowing through the heart.

There are many good guides to local history, such as ‘Brislington’ (Archive Photographs) compiled by Judy Chard, Mary Mitchell and Jonathan Rowe.

Modern Brislington, and the Parish of St Luke’s, now extends way beyond the original village boundaries. The trading estate and newer (1980s) retail park make the area a magnet for a great deal of traffic, and the A4 is often a slow moving traffic jam.

The usual house building has brought many people into the area, but once in Brislington, people tend to stay put for some time. We are close (2.5 miles) to the city centre, and well served with buses both into the city and also out to Bath which is 10 miles away.

There are primary schools, a secondary school and a tertiary college close by, and two substantial supermarkets on the edge of the parish.

To find out whether or not you live in the parish just enter your postcode in https://www.achurchnearyou.com/